* Beijing calls on Washington to ‘stop the act becoming law’ after it is passed by Senate, with the US president retaining the right to sign or veto it 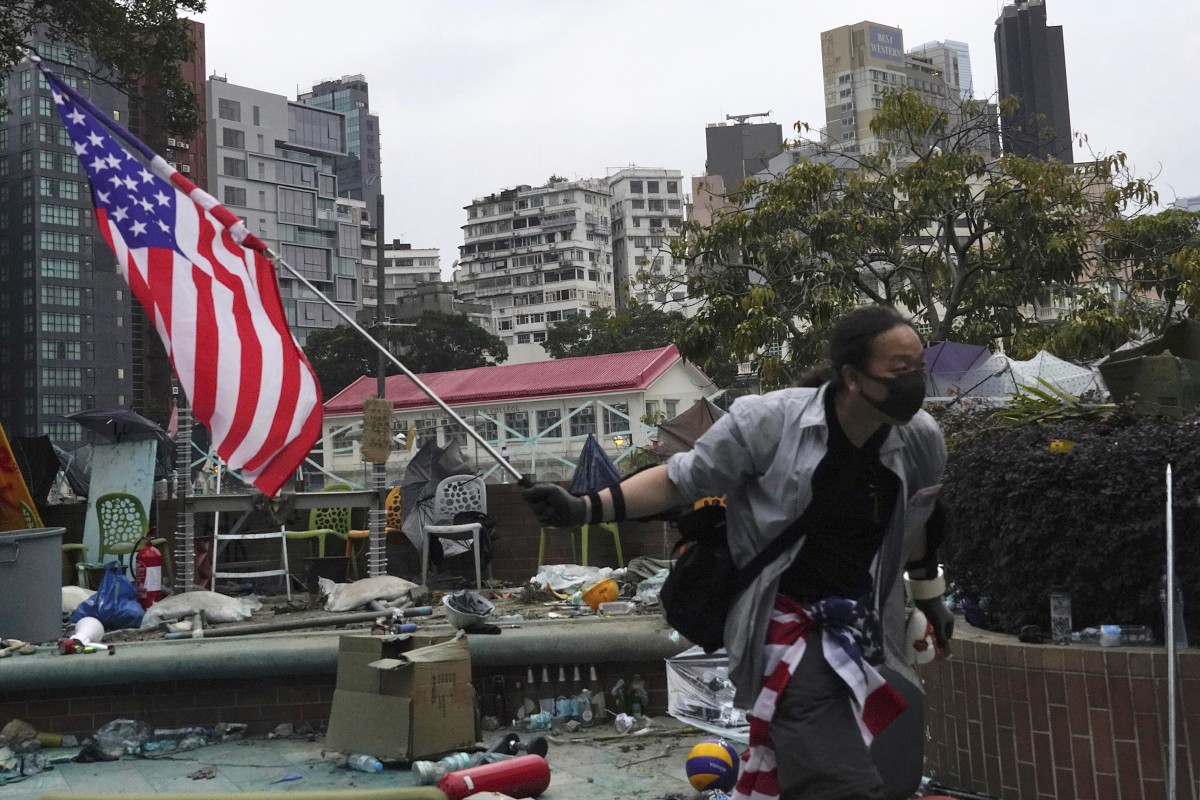 A protester holds an American flag on Wednesday at Polytechnic University, where anti-government protesters and police are locked in a stand-off. Photo: AP

China summoned a senior United States diplomat on Wednesday as it warned it would retaliate if US President Donald Trump signed the Hong Kong Human Rights and Democracy Act into law.

In a statement after the bill was passed by the US Senate, the Chinese foreign ministry said Foreign Vice-Minister Ma Zhaoxu had summoned William Klein, the US embassy’s minister counsellor for political affairs.

“China will take strong opposing measures, and the US has to bear all the consequences”, the statement said.

The Senate passed the bill on Tuesday, an act that could pave the way for diplomatic action and economic sanctions against Hong Kong’s government.

US Senator Marco Rubio said the passage of the bill was an important step in “holding accountable those Chinese and Hong Kong government officials responsible for Hong Kong’s eroding autonomy and human rights violations”.

“The United States Senate sent a clear message to Hongkongers fighting for their long-cherished freedoms: we hear you, we continue to stand with you, and we will not stand idly by as Beijing undermines your autonomy”, Rubio said.

It was the second time China had summoned a US diplomat since anti-government protests in Hong Kong began five months ago, triggered by a now-withdrawn extradition bill that would have allowed the transfer of criminal suspects to mainland China’s opaque legal system.

Stocks fell in Hong Kong on Wednesday as Beijing’s condemnation of the Senate’s move renewed worries about prospects for China-US trade negotiations. The Hang Seng Index fell 0.8 per cent, to 26,889.61, while the China Enterprises Index lost 0.7 per cent, to 10,619.51.

White House informal adviser Michael Pillsbury said the passage of the act “strengthens the range of options for President Trump because he now has to decide how precisely to implement the legislation”.

The American Chamber of Commerce in Hong Kong said it respected the Senate’s decision as “as a renewed expression of America’s fundamental interests in Hong Kong”, but warned of “possible unintended, counterproductive consequences”.

Potential fallout could include harm to the ability of American businesses to “continue exercising a strong positive influence in support of Hong Kong’s traditional core values – in particular the sections addressing export controls and sanctions”, the chamber said.

But other observers and former officials said the US already had other tools it could use.

In June, Robert Forden, deputy chief of mission at the US embassy in Beijing, was summoned by Foreign Vice-Minister Le Yucheng.

Klein was summoned after foreign ministry spokesman Geng Shuang said that any attempt by the US to interfere in China’s internal affairs would be in vain.

“We call on the US side to take a clear look at the situation and take steps to stop the act from becoming a law, and stop meddling in the internal affairs of China and Hong Kong, to avoid setting a fire that would only burn itself”, Geng said.

“If the US sticks to its course, China will surely take forceful measures to resolutely oppose it to safeguard national sovereignty, security, and development interests”.

Geng said the move by the Senate was a serious violation of international law and international relations norms, which China “strongly condemns and opposes”.

The situation facing Hong Kong was not about human rights and democracy, but about stopping violence and restoring order, Geng said.

He said violent acts had jeopardised social order and challenged the “one country, two systems” principle under which Hong Kong retained certain freedoms and a degree of autonomy after its 1997 handover from Britain to China.

The bill’s passage in the Senate came after the House of Representatives passed its version
last month. The Senate also passed the Protect Hong Kong Act, which would prohibit the export of non-lethal crowd control and defence items to Hong Kong.

The House and Senate versions of the Hong Kong Human Rights and Democracy Act will need to go to a committee of House and Senate members to be reconciled into one unified bill that will go back to each chamber for final approvals. Trump will then have ten days to sign the bill into law or veto it.

Both versions of the bill would require the US government to produce an annual report, certified by the secretary of state, on whether Hong Kong had retained enough autonomy from Beijing to retain the distinct trading status that protects the city from the tariffs the US imposed on Chinese imports last year.

The bill also calls for sanctions against any individuals or entities deemed to have violated freedoms guaranteed under Hong Kong’s Basic Law, its mini-constitution.

The number of senators co-sponsoring the Hong Kong Human Rights and Democracy Act surged on Monday, bringing in Senate Republican leader Mitch McConnell and showing the biggest jump since the bill was introduced in June.

The surge followed a stream of reports about a violent stand-off since Sunday between Hong Kong’s police and radical protesters at Polytechnic University.

Many US lawmakers have blamed Beijing and the Hong Kong government for the cycle of violence in recent months that culminated in the university clashes.

The Hong Kong government expressed regret about the passage of the two US acts, saying they were unnecessary and groundless. It said in a statement that the acts would hurt both Hong Kong and US interests.

Secretary for Commerce and Economic Development of Hong Kong Edward Yau Tang-wah criticised what he called an “unwarranted and unnecessary” act for “adding fuel to the fire”.

“I don’t want people to be mistaken: the unwarranted foreign intervention is adding fuel to the fire in Hong Kong”, he said. “I don’t see any possible ways to de-escalate the situation we are having. So I would urge people to refrain from meddling into the already delicate situation.”

“Some extreme acts of violence are devastating and horrifying”, Yang said. “These facts clearly prove that the biggest risk facing Hong Kong now is violence, not the issue of ‘human rights’ and ‘democracy’.

“The act by some American politicians has completely mixed up right and wrong, and is a double standard without any principle”.

A statement by the central government’s liaison office in Hong Kong said violent protests in the city should not be tolerated in any civilised society, and it was wrong for US politicians to “beautify their terror acts”.

“We call on the US side to immediately stop the dangerous game of playing with fire and going further down the wrong path, otherwise it will suffer bad consequences”, it said.

More than 1,200 US companies do business in Hong Kong, of which more than 800 are either regional offices or headquarters, attracted by the city’s free market orientation, transparent legal system and well-established rule of law, according to the American Chamber of Commerce in Hong Kong.

Yuan Zheng, a US affairs specialist from the Chinese Academy of Social Sciences, said Beijing was unlikely to take strong countermeasures against the US, but said the bill’s passage would bring harm to Hong Kong, complicating the situation in the city.

“Hong Kong citizens – not the Chinese mainland – will bear the brunt of unresolved problems in the city”, Yuan said. “Both Beijing and the Hong Kong government have to rethink their approaches to do better jobs in the future”.