… as the World’s Major Trading Partner

Over this timeframe, international trade has transformed significantly – not just in terms of volume and composition, but also in terms of the countries that the rest of the world leans on for their most important trade relationships.

Now, a critical shift is occurring in the landscape, and it may surprise you to learn that China has already usurped the US as the world’s most dominant trading partner.

Today’s animation comes from the Lowy Institute, and it pulls data from the International Monetary Fund (IMF) database on bilateral trade flows, to determine whether the US or China is a bigger trading partner for each country from 1980 to 2018.

The results are stark: before 2000, the US was at the helm of global trade, as over 80% of countries traded with the US more than they did with China. By 2018, that number had dropped sharply to just 30%, as China swiftly took top position in 128 of 190 countries.

The researchers pinpoint China’s 2001 entry into the World Trade Organization as a major turning point in China’s international trade relationships. The dramatic shift that followed is clearly demonstrated in the visualization above – between 2005 and 2010, a number of countries tipped towards Chinese influence, especially in Africa and Asia.

Over time, China’s dominance has grown dramatically. It’s no wonder then, that China and the US have a contentious trade relationship themselves, as both nations battle it out for first place.

A Tale of Two Economies

The United States and China are competitors in many ways, but to be successful they must rely on each other for mutually beneficial trade. However, it’s also the major issue on which they are struggling to reach a common ground.

The US has been vocal about negotiating more balanced trade agreements with China. In fact, a mid-2018 poll shows that 62% of Americans consider their trade relationship with China to be unfair.

Since 2018, both parties have faced a fraught relationship, imposing major tariffs on consumer and industrial goods – and retaliations are reaching greater and greater heights: 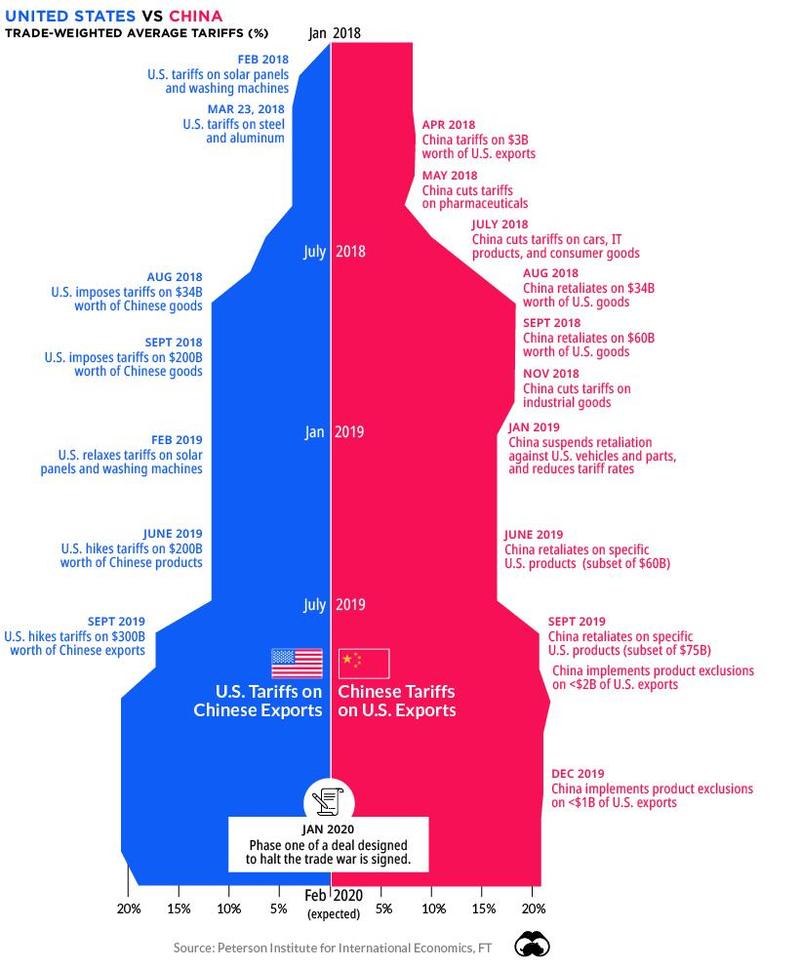 While a delicate truce has been reached at the moment, the trade war has caused a significant drag on global growth, and the World Bank estimates it will continue to have an effect into 2021.

Your email…
At the same time, China’s sphere of influence continues to grow.

One Belt, One Road, One Trade Direction?

China seems to have a finger in every pie. The nation is financing a flurry of megaprojects across Asia and Africa – but one broader initiative stands above the rest.

China’s “One Belt, One Road” (OBOR) Initiative, planned for a 2049 completion, is advancing at a furious pace. In 2019 alone, Chinese companies signed contracts worth up to $128 billion to start Chinese large-scale infrastructure projects in various countries.